Meet The Meatless Farm Co | An interview with Rob Stanworth

As a company, The Meatless Farm Co has gone from strength-to-strength in the past year.

Earlier this week, we caught up with Rob Stanworth, who is the Social & Content Manager at Meatless Farm. We chatted about the past twelve months for the company, as well as what’s on the way in the coming year.

King & Co.: To kick us off, who is The Meatless Farm Co? Can you tell us a bit about yourself and the company?

Rob: My name is Rob Stanworth, and I’m the Social & Content Manager at Meatless Farm, working within the marketing team.

Here at The Meatless Farm, we’ve created a range of meat alternative products that are 100% plant-based. We’re trying to encourage people to cut down on their meat intake and switch to plant-based – even if it’s just once a week – and our delicious products are helping them achieve that.

Our products include meat-free burgers, mince, and sausages, which are made from our signature mix of pea protein, rice protein and soya protein. Our products are all based on the nutritional value of meat; they’re high in protein, gluten-free, and 100% vegan.

We were founded by a Danish guy called Morton Toft Bech in 2016, and it initially took two years of product development before our products first appeared on the shelves of Sainsbury’s in 2018. Since then, we’ve launched into the Co-op, Morrisons, Amazon Fresh and Ocado in the UK, and last year we launched into Whole Foods in the US, as well as Canada, China, the United Arab Emirates, Sweden and Spain.

Global domination is on the cards in 2020!

It sounds like you’re on track! On from that, what made you choose Graphical House as your base for world domination?

Rob: We just needed the space. We were growing that quickly that it didn’t take long for our old office (at Calls Landing) to be at bursting point.

Obviously, we knew that you had this building (Graphical House). It was a shell when we got it, which was great because we were able to put our stamp on it, and make it our own. Initially, we took the two top floors, but now (as you know) we’re taking over the entire building as the business continues to grow rapidly.

Being in Graphical House has really helped us to facilitate our growth. We’ve gone from having six to eight people in our old office to now having more than thirty. Plus, we’ve got a development kitchen, a presentation kitchen, dedicated boardroom and team meeting spaces, so Graphical House just ticked every box.

We also knew we wanted Leeds to be our base – which made Graphical House even better for us. 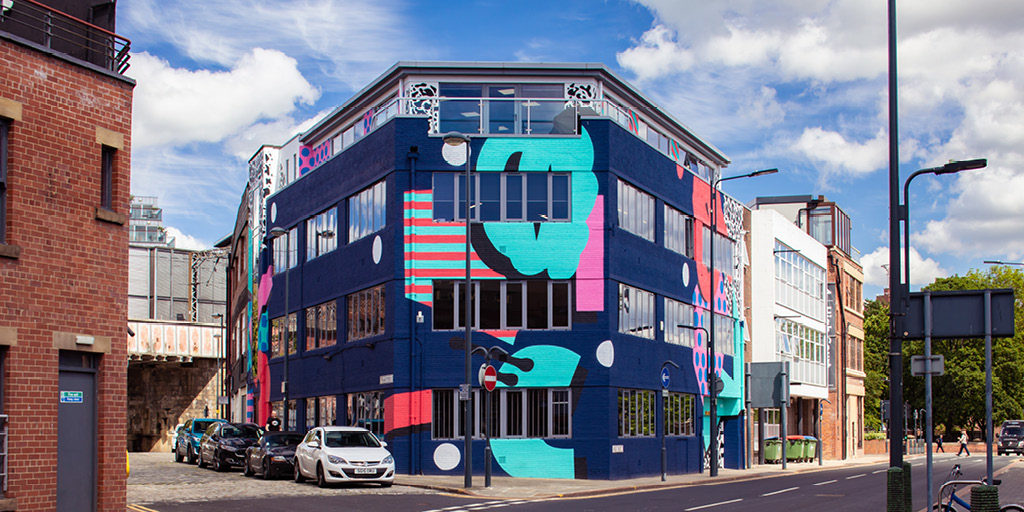 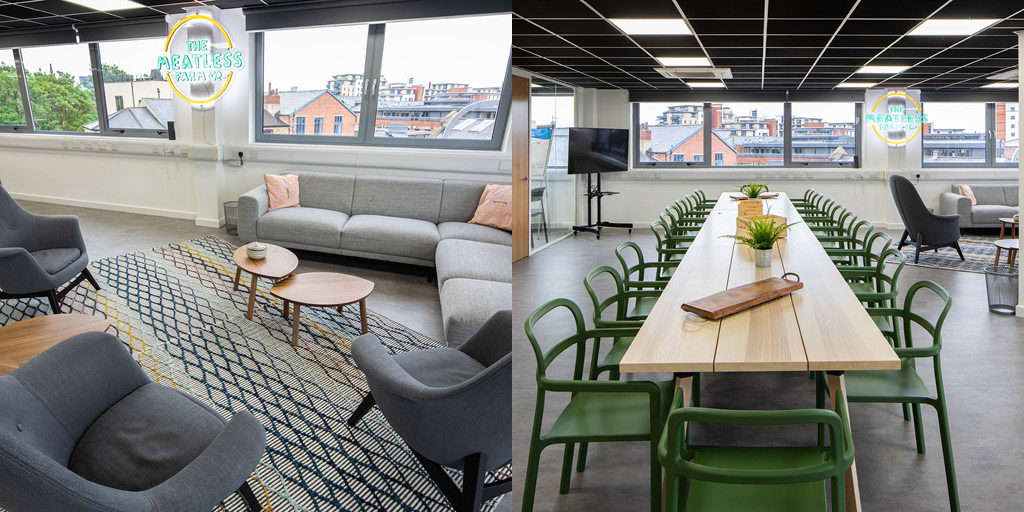 What are your plans for the future (that you can tell us about)?

Rob: We’ve got some big plans on the horizon – from international expansion into other markets to expanding our current product lines, improving the recipes of our existing products and maybe even introducing something new.

2020 is set to be an exciting year for us. The company itself is also looking to bring in more senior expertise at the top level. There’s a real focus on taking us from a small startup business and a challenger brand to a high-powered brand that’s been kicked into second or third gear. 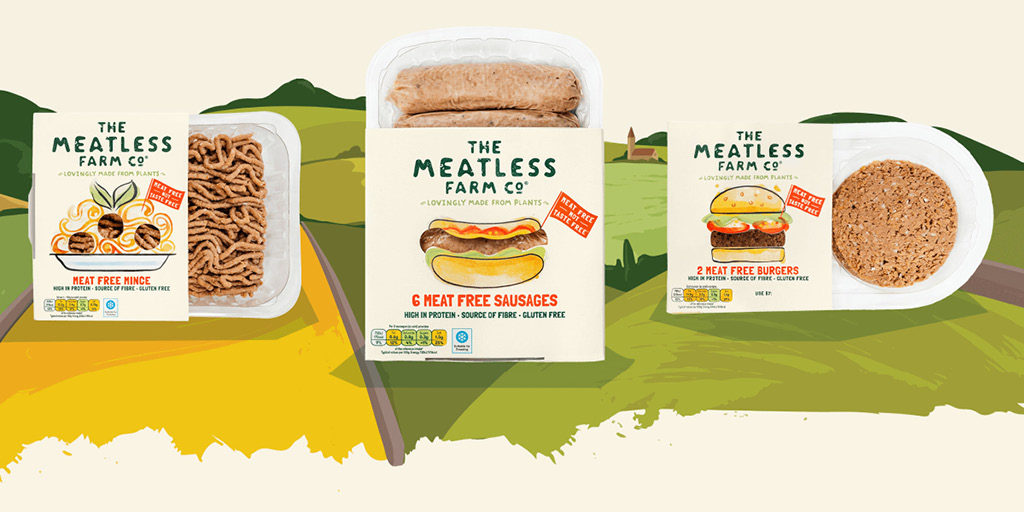 Going meat-free has become more mainstream in the past year. Why do you think this movement is gaining momentum?

Rob: From our research, we know that personal health environment is a massive reason for people to eat less meat, as well as climate change and animal welfare considerations.

In terms of climate change, people are just a lot more aware now about the environment around us and the damage that we’re doing to it…

Even if you only decide to go meat-free for one day a week, the difference you can make in the UK is equivalent to cutting our greenhouse gas emissions by fifty million tonnes – which is the same as taking sixteen million cars off the road.

The arguments are compelling – but we’re not trying to be preachy and pushy. People are going to make their own choices regardless of what we say.

Hopefully, people will find that our products taste and cook just like meat. It’s all about making simple swaps… Take our mince, for example – it’s really versatile and can be swapped for meat in family favourite recipes like spaghetti Bolognese, lasagna, and meatballs. There’s no need to learn new recipes or ways of cooking.

We were really excited to hear that Channel 4 had invested in Meatless Farm, and all noticed your ads during Bake Off. What are the larger implications of this deal for the company, and what’s next for your advertising?

Rob: The investment deal is really exciting for us and means that in return we have a partner to run regional TV and BVOD advertising.

We ran a campaign between October and December in The North of England last year, on both TV and video-on-demand (BVOD). It’s enabled us to drive awareness and dip our toes into TV advertising.

It’s great to have a company like Channel 4 putting their name behind us. They’ve got a fantastic investment arm to their business, which is great for us.

Channel 4 has always been a progressive and disruptive force on television, which fit perfectly with our brand and the messages we wanted to convey to their core audience. By having our ads on during popular shows like Bake Off, it helped us get the brand in front of the right people at the right time.

Off the back of that, what would you say have been some of the most exciting developments at Meatless Farm over the past twelve months (that you can tell us about?)

Rob: The big one was obviously launching in America and Canada. As you can imagine, it’s helped us open a few more doors – whether that be globally or with retailers here in the UK.

<We’re always doing lots of work on our products as well. We’ve got a growing development team who are always looking at improving our recipes and developing new products all the time. There’s always something going on; we’re not just going to stay where we are, we’re always looking to improve.

And, what’s next for the building?

Rob: So, we’ve got our development kitchen on the ground floor, and we’ve recently also taken on the second floor of Graphical House, as you know. It’s going to become more office space and meeting rooms, which is going to be a massive boost to the team.

Our team is growing globally (as is the brand); we’ve got people based in Mallorca, Denmark, Amsterdam and New York. Having additional meeting spaces and technology will ultimately help us be able to do our jobs properly. 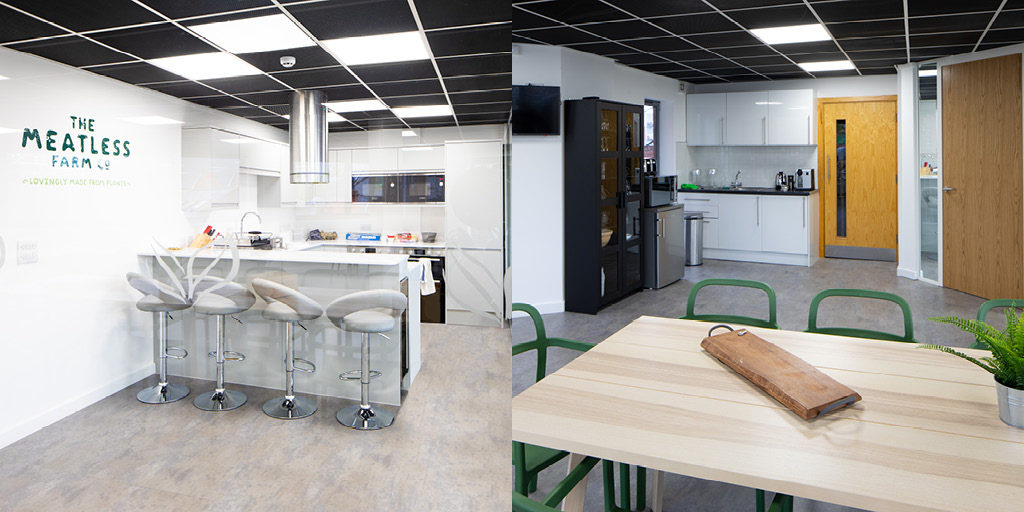 Before Christmas, you announced the appointment of Jesper Højer to your board. What are you hoping he will bring to the business?

Rob: The work he did with Lidl – taking them from where they were to where they are now – was massive. They’ve become a disruptive force for supermarkets in the UK – taking on the likes of Asda and Tesco as a discount retailer.

He’s got many contacts that we’re hoping will open plenty of doors for us, as well as lending us his expertise from his time at Lidl to help drive us forward.

Wetherspoons have recently started stocking your burgers… How important is it for a brand like Wetherspoons to be selling Meatless Farm products?

Rob: We’re currently in nearly nine-hundred Wetherspoons around the country. Initially, we had a trial with them in selected restaurants, and it went that well that they just said: “Right, we want you in every restaurant”.

Food service is an important part of our business, and we’re looking to expand that side of the company. Not only are we trying to get our products into more mainstream restaurants and fast food outlets (no names, I’m afraid), but we’re also working with wholesalers and companies like Brakes to get our products into smaller bars, restaurants and eateries.

Finally, is there anything you miss about being at Calls Landing?

Rob: The riverside views were lovely, and the loft was a neat little space, but honestly? Being above the pub! There was something nice about being able to wander downstairs for a pint at 4pm on a Friday.

We need to be here – somewhere of this size. We need to keep looking forward instead of back. That was how our days used to be: we were in a loft as a start-up. Now? We have a proper base that works for the team and a fast-growing company.

There’s no denying that Meatless Farm has gone from strength-to-strength in the past twelve months, and they’ve definitely made the space work for them since they moved into Graphical House in May.

Here at King & Co., we’re dedicated to serving our tenants with spaces that support their long-term goals and development. To find out more about how a King & Co. property could help unlock your business’ potential in The North, contact us today.